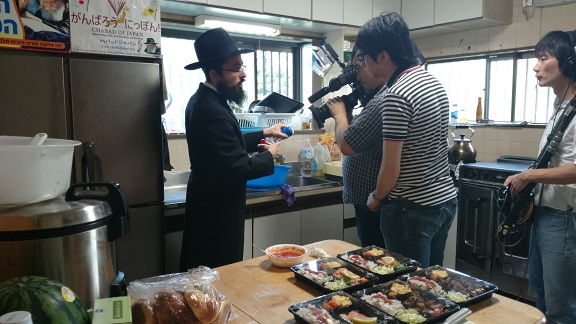 This week Japanese Television crew visited Chabad House to interview Rabbi Edery about Kosher Japan and kosher food in general.  In Japan, there is a growing interest in kosher food. One need not be so finely tuned to pay attention to that. This is because of knowledge being so accessible today, and Rabbi Edery’s relentless efforts, ”kosher food” is not a rare or unknown word in Japan anymore. This time the interview centered on kosher food deliveries. They asked where Jewish people are coming from, and for what purpose. Jews come to Japan from all over the world, for business, tourism, study or work.
Every week, Chabad of Japan coordinates the kosher food deliveries to hotels, restaurants and offices in Tokyo and as far away as Hokkaido and Kyushu. There is an organized system of ordering and the food packages arrive on time- Japanese style, and in good condition. The local postal services have frozen, refrigerated and regular options available. This makes it much easier to keep kosher while one is visiting Japan short or long term. The TV crew were fascinated by the large variety of kosher marks on foods, which are available in Japan, but they were not aware of. They were especially proud of the KJ symbol on many food items- since this is the first and only Kosher Food supervision in Japan.
The program on Kosher food will air next week. We would like to thank the one and only Muto san for his patience and devotion to Kosher Japan. May Hashem give him and his family eternal blessing. 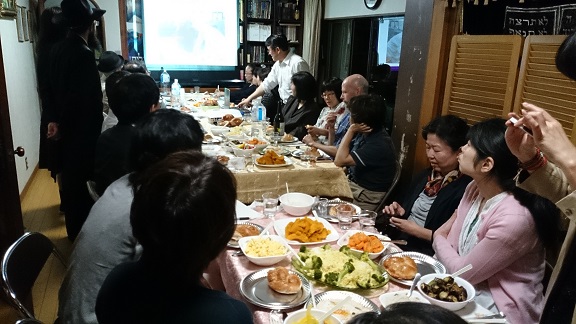 Last Wednesday we had the third lecture of the reknowned Dr. Yuroh Teshima. One day later, Chabad of Japan hosted a ”Get To Know Kosher” lecture by Mr. Muto. The informative and interesting lecture was followed by a fantastic and delicious meal, starting with Challah, ending with Cinamon rolls.
The guests greatly enjoyed and were simply amazed by the information and variety of foods offered to them. They all asked questions about kosher food and Judaism in general. Rabbi Edery- the star of the show- explained and clarified many issues that were brought up. He distributed the Seven Noahide Law cards in Japanese, and explained the purpose of Chabad of Japan. The evening ended with the guests extremely pleased running to catch the last trains. Some came as far as two hour train ride.
Special thanks to Aoki san, Shimura san, Takeshima san for their help and initiative. May you be blessed always.