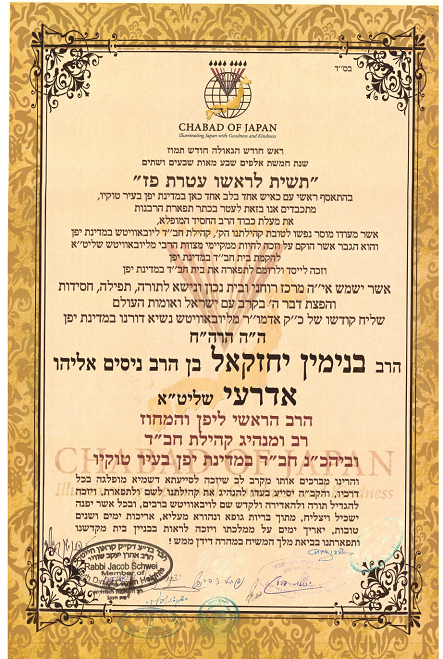 His Past, Present and Future.

In 1999, Rabbi Edery came to Japan to establish the first Chabad House in Japan. Since then he has been devoting himself to help people regardless of their creed, color or ethnic background. He dedicates himself to strengthen Jewish people who live in Japan and those who come temporarily. At the same time he teaches and spreads the Seven Noahide Laws among non-Jewish people as it is written in the Torah. All his works are focused for the sake of heaven, namely, ‘’to fix the world with the kingship of G-d’’.

In 1999 he founded the first kosher certification agency called “Kosher Japan” with its abbreviation “KJ.” The purpose of the agency is to help Japanese agriculture by promoting the premium products internationally. Rabbi Edery encourages Japanese farmers and food producers to produce various kosher products in Japan, thereby helping them expand their domestic and overseas markets.

In light of the above dedication, the Chief Rabbinate of Israel chose and officially ordained Rabbi Edery as the Chief Rabbi of Japan in Tamuz, 5772 in Jewish Year (July 2012).

In June 25th 2015, the office of the Prime Minister of Japan invited Rabbi Edery to have an audience with him as the Chief Rabbi of Japan. Mr. Yoshihide Suga, Chief Cabinet Secretary, granted the audience to him as the Chief Rabbi of Japan, and expressed the gratitude to him for his dedication for the sake of Japanese people, especially for his wholehearted relief efforts for the people suffered at the Great Earthquake and Tsunami in the North-east Japan in 2013.   Mr. Suga showed his appreciation to Rabbi’s care and concern for the farmers of the North after the Tsunami. He instructed his secretaries to assist the Rabbi’s works at any time on any subject if necessary.

The audience was arranged through the good office of Senator Kazuya Shimba and Dr. Jacob Yuroh Teshima. Senator Shimba studied at the graduate school in the Hebrew University of Jerusalem in 1991-92 and served as Senior Vice Minister of Defense in 2010-11, and Senior Vice Minister of Foreign Affairs in 2012. Dr. Teshima was the last student of Professor Rabbi Abraham Joshua Heschel zt”l, graduated from the Hebrew University of Jerusalem in 1967 and received a Doctoral degree from the Jewish Theological Seminary of America. He regularly gives classes at the Chabad House (Mavo Layahdut).

The audience granted to Rabbi Edery by the Japanese government on June 15 was unprecedented in history and an acknowledgment of his great achievement indeed. 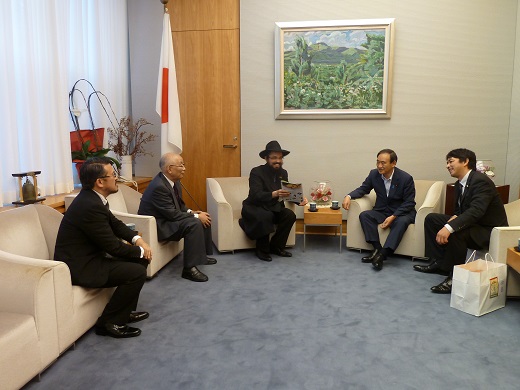 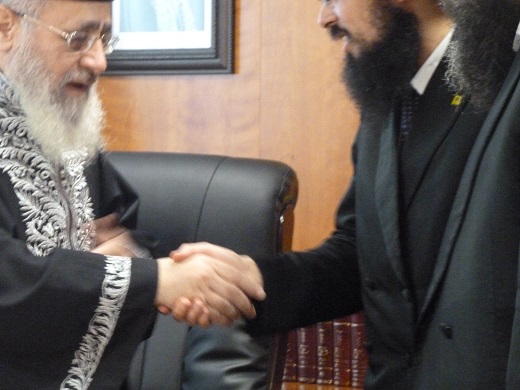 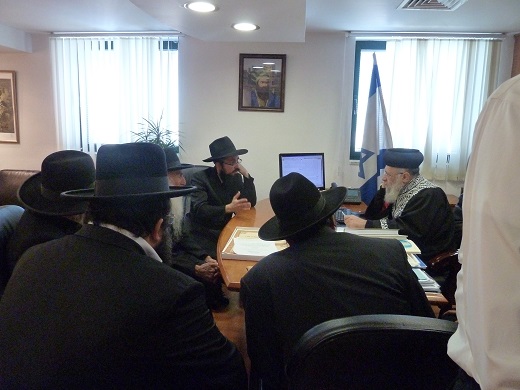 The staff , members and friends of Chabad  of Japan would like to wish:

May Rabbi Edery be blessed by Almighty G-d to continue in his position in good health for long life and good years!

May his organization Chabad House of Japan and Kosher Japan continue to be a lighthouse of goodness and kindness illuminating the spiritual desert of Japan till the coming of Moshiach.