After many years of tireless efforts, Chabad Tokyo Japan succeeded in doing Shechita in Japan.

2 years ago, Rabbi Binyomin Edery, director of Chabad Tokyo Japan, brought a shochet (slaughterer) from N.Y. to do the first Shechita in Japan. Since then, many shechitas were done, including slaughtering of beef, this past Passover.
This is an incredible breakthrough for Jews in Japan. Until local shechita was started, poultry was imported from the States. Usually not so fresh, after, sitting in freezers sometimes for months.

Meat, is still a problem to import, because of different viruses. Now, Thank G-d, there is chicken and meat available for all the Jews of Japan.
Big international stores such as National Azabu Supermarket, and Nissin Supermarket, are selling the strictly kosher chickens, and with great pride.
A very big hit in the supermarkets, are the kosher chicken on skewers, they are called in Japanese “ Kosher Yakitori”. People enjoy them greatly, because it is very easy to prepare. Just to take them out of the package, put in a saucepan or grill, seasoned as one likes, and it comes out delicious.

Chabad Tokyo Japan did a few promotions for kosher food, in the National Azabu Supermarket including the popular kosher “Yakitori”. There is always a very positive response from the people. 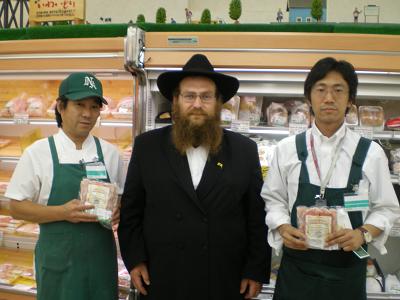 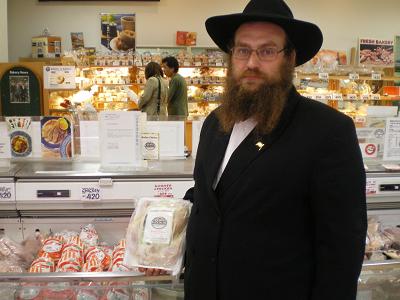